Punctuation (and spelling and capitalization) in text messages is different from punctuation in other forms of written communication (emails, memos, standard prose).

In particular, punctuation, or sometimes the lack of it, in text messaging adds layers of meaning. Texts can be close to a live transcript of speech, so more characters are needed to replicate the rhythms and tones of speech.

Person A texts Person B, saying:

do you want to get dinner tonight at that new Thai place which just opened?

If Person B responds

we could do that

it means something different from

we could do that.

The closing period in a text can add a negative nuance: a downward tone, a reluctance. (An exclamation point would mean excitement, as is more typical.)

So here's my question: Let's say I'm including texting in my story. Let's also say that I don't have access to many different kinds of formatting (like the block text here on SE).

If I'm writing most kinds of dialogue, and I have speaker tags, I use a comma to connect the dialogue and the tag:

"We could do that," she answered.

But if I'm trying to show a text message, I want to indicate that there's no closing punctuation:

we could do that she answered.

and dang, that looks dreadful.

Putting the speaker tag in front means it looks like I forgot to end the sentence:

She answered we could do that

And you do need tags occasionally so the reader knows who is texting.

How do I address this punctuation collision?

Well, you can take inspiration from pictures of texts that are posted all the time. 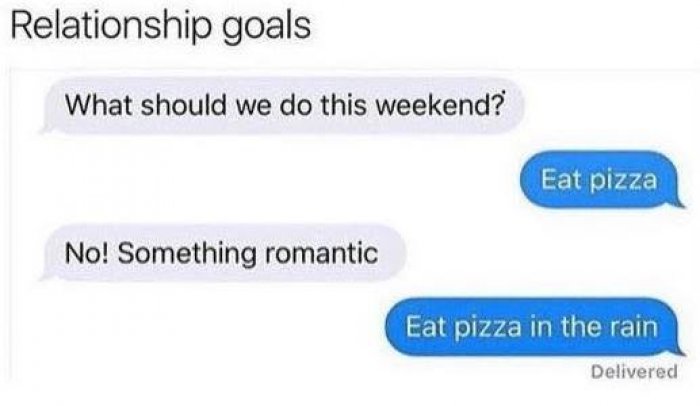 But basically, online, people are accustomed to reading text messages in this format. Doing this in book form would mean indentation, and so on, if you wanted a full convo.

If not, you can include it in the body of the text, in short by paraphrasing.

Book editing hasn't exactly caught up with this, so the "right" way looks just...wrong.

Here's a handy link to help with that.

Italics, beats thrown in, and tags here and there seems to be the best way to do it, unless you are doing a convo in its entirety. As long as you are consistent in your format, it will be fine. On the internet when relaying texts not through pictures, the format is often:

Me: I don't know when I will be back

The punctuation problem, or lack thereof in REAL texts is just something you will have to decide. If you want to be authentic, you can keep them as they are (shown above) or you can correct them. This happens in dialogue as well. In real life there are a lot of ums, ands, likes, repetitions and speakers interrupting themselves. In book conversations, we throw a few in for realism, but take out most for the sake of readability and art.

This is such a new area that there isn't really a consensus. Some publishing companies have their own in-house standards, which is really only something you'll come up against if your book is text-heavy and/or they actually pick up your book. But mostly, writers have to set their own standards and stick with them within the bounds of their novel.

Challenges Writing challenge #3: Something new
Meta Hierarchical tags are now available
Q&A What are the benefits of including complete working code samples in documentation
Q&A How to structure a sentence containing long code examples?
Q&A Good Examples of and Practices in Code Documentation

Join us in chat!